The History of Scrabo Hall

The year was 1905.  A few men met together by the roadside underneath the trees opposite the gates of Killynether Castle and in the shadow of Scrabo Tower.  Some months earlier these men had heard the message of the gospel in Newtownards Methodist Church and had come to faith in Christ as Saviour.  As they met together they shared thoughts from the scriptures and had a time of prayer.  For most this would have been their first experience of praying in a public way.  They continued to meet from time to time and also arranged open-air gospel meetings.  This was something novel in those early days in that part of the country and the news spread throughout the townland of Ballyalton causing people to come from almost every house out of curiosity.  Some brought their pipes and the air was thick with tobacco smoke.  By the grace of God some of these men also came to faith in Christ.  As the weather got colder they moved into an old whitewashed barn at Caughey’s farmyard, quite close to Killynether School.

In the early summer of 1906 a group of young men came by tram and then bicycle from Belfast and erected posters along the roads announcing gospel meetings to be held in a tent. This was a something new and the group from the barn supported the meetings.  The mission lasted 16 weeks and some 30 people were converted, mainly from the country area.  When the mission ended the local believers returned to the barn and invited the preachers to come and give then some teaching.  This they gladly did.  Soon afterwards the original Scrabo Gospel Hall was built as a timber frame corrugated sheeting structure at the roadside in the townland of Ballyalton about 100 yards from where the gospel tent had been pitched.  The Scrabo Assembly met there for the first time in March 1907 when some 45 Christians met to remember the Lord in a communion service.  Much blessing was experienced through the years in this building as the Word of God was preached and taught and many people came to know the Lord Jesus as Saviour.  Some moved to establish fellowships elsewhere.

The fellowship continued to meet in the original building until 1960. At that time the leaders of the assembly, when studying in the book of Acts, became aware of the Lord’s leading them to relocate nearer to the town of Newtownards.  They therefore planned to move from behind Scrabo Hill to the present location in Mill Street on the edge of what was then the recently constructed Scrabo Housing Estate.  At that time the fellowship had 34 members, many of them elderly, but the leaders, with great vision and faith, arranged for the building of a new hall which could hold over 200 people.  A sports hall and classrooms were subsequently added, as the Church sought to reach out to the young people of the community.  With over three hundred children and teenagers regularly attending church activities during a week and the main hall filled to capacity at the Sunday services the leadership had the vision, under God, to make a further step of faith to enlarge the facilities to make them both spacious and modern enough to serve the increasing opportunities for witness within the twenty first century community. 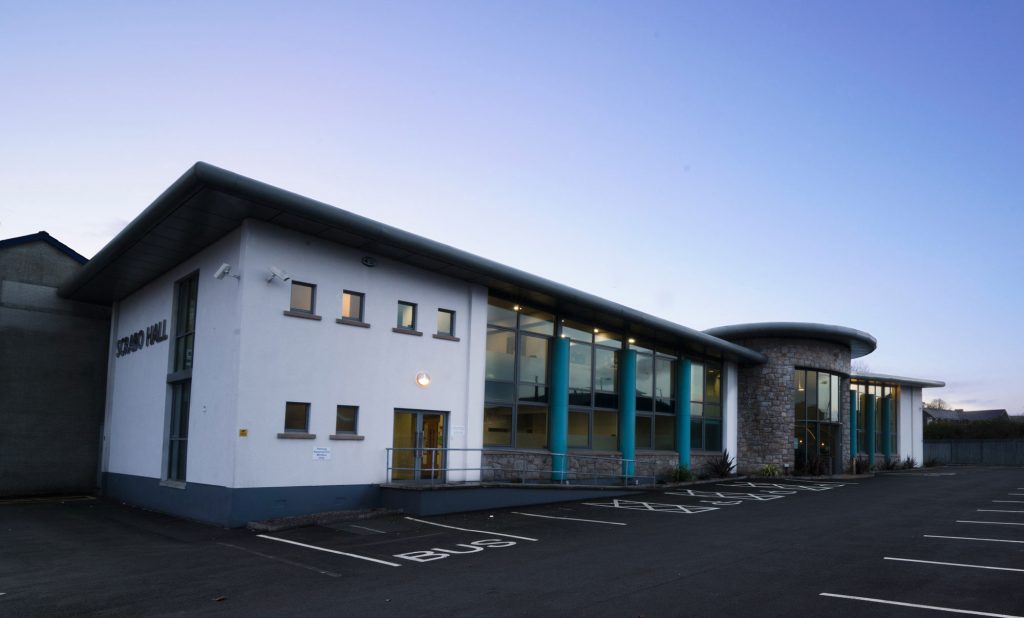 Scrabo’s new facilities, which were opened in June 2006, were designed to be welcoming to guests and to facilitate the wide range of weekly ministries The loop system for the hard of hearing and wheel chair access make it user friendly for the disabled.  The vision of the leaders in Scrabo Hall is to be a church committed to the proclamation of the gospel, seeing people, young and old, coming to faith, growing spiritually and becoming devoted followers of the Lord Jesus Christ.  Scrabo Hall is recognised as being about people rather than a building and programs. The Lord has blessed this further venture and the premises are used almost every night of the week as well as for a variety of daytime activities.  The leaders have at various times been able to arrange for the puchase of adjoining lands thereby increasing the carparking provision.  The decision to move to Mill Street has been particularly blessed by God in that through the years among those who have come to faith there have been many from the nearby Scrabo Estate.